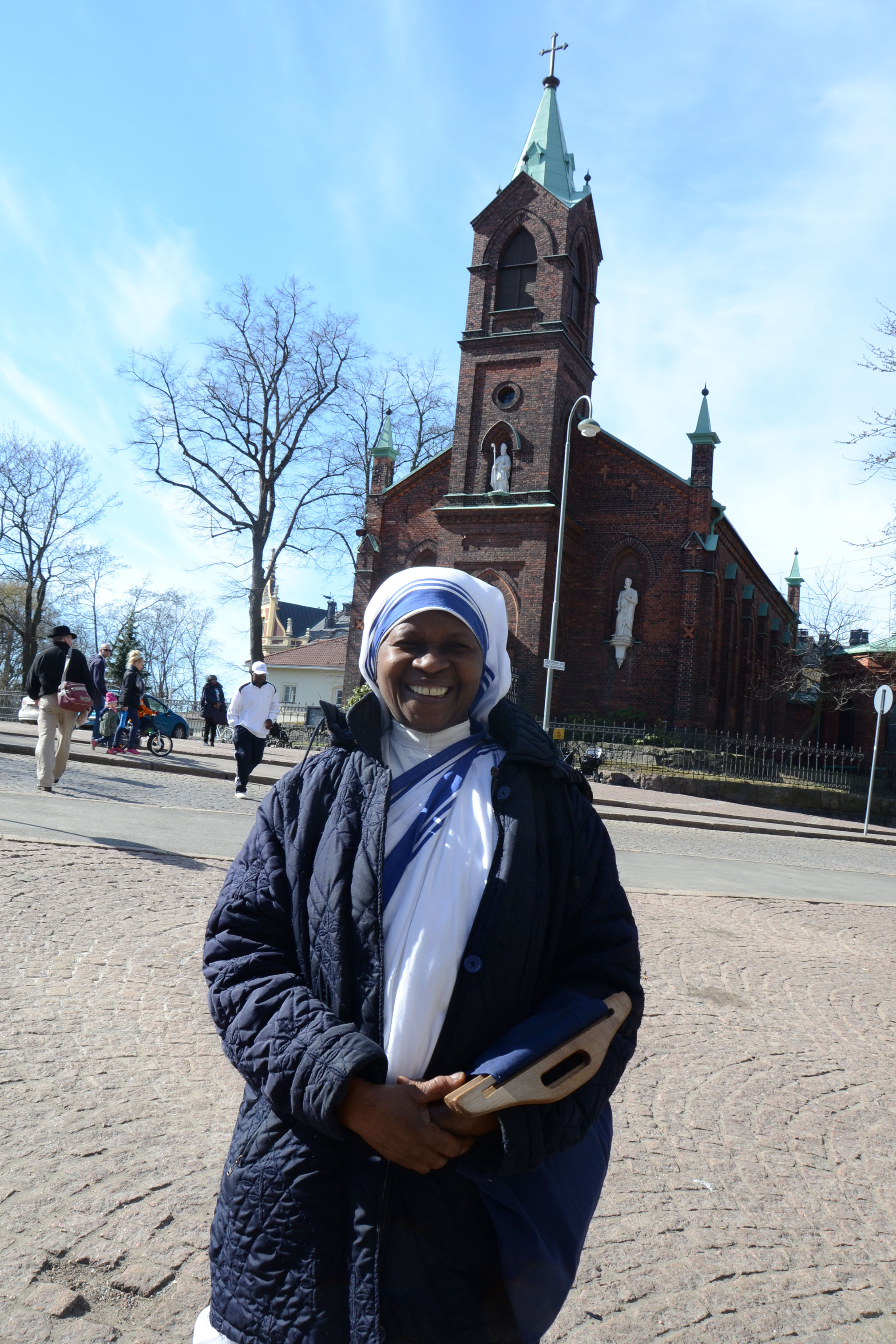 The foundress of the Missionaries of Charity, Blessed Teresa of Calcutta (1910-1997) or Mother Teresa, saw the huge crowds of abandoned and despised people in her work in India and felt their need for help. In 1946, she received an call from God to help these people, and in 1950 in Kolkata, India, she founded the Community to serve the poorest of the poor, those abandoned and considered a burden by the society. The congregation has grown rapidly and now has about 4,500 sisters in 133 countries around the world. The sisters came to Finland in 1999 and have since then been working with the lonely, the elderly, prisoners, migrants and families. In their community in Helsinki lives also sister M. Leocadia MC whom I asked to tell us of her life.

I come from a Catholic family with eight children; I myself am the fifth of them. My home is near the Tanzanian city of Tabora. Even when I was in grade school I wanted to become a sister, but I did not yet know the orders and did not know which one I would like to join. After high school, I went to a secretary school Tabora, living in my aunt’s house not far from the school. Near the school, there had been the first Missionaries of Charity house in Africa already for five years. The sisters served in my church, came there for Mass on Sundays and distributed medicines to the sick after mass, free of charge. I got malaria and the sisters gave me medicine; I was surprised when they did not ask for any fee. I was 18 years old.

Soon after this incident, I told my aunt that I would like to go with a friend to take a look at the sisters in their house. I did not know much about them, just that they were Indian. We did not have a common language. The superior received us, and let us come there to help every weekday. There were a few girls who had joined the Missionaries of Charity, and I said to my aunt that I might want to join them. My aunt told me to go talk to my parents and so I did. My father, however, said that there is no way I could become a sister. At the time, I approved his decision, and I prayed the Rosary every day to find the will of God.

Time passed and I still felt the calling to be strong, I prayed and helped the sisters regularly. And one day my father came to see me at my aunt’s, and upon hearing I was still thinking about life as a sister, he became furious and threw at me the money for a bus journey to return home. Crying, I gathered the few things I had and went to take the bus but then my aunt came, said she was going to speak with my father and told me to go back to her home. My aunt took the bus to my parents and convinced them to agree. She said if this is a real vocation my parents could not do anything about it, and if it is not, then I would soon return.

Two weeks later Blessed Teresa came to visit Tabora and I was also invited to meet her. I felt unspeakable peace and holiness around her. Mother Teresa asked me why I want to join the sisters. I told her, ”Because I want to belong to Jesus.” That conversation took place at 8 o’clock in the morning. After my answer Mother Teresa said to the local sisters, ”Let her come at eleven.” My joy was great when a few hours later I came to the sisters’ house to stay. The next day, Mother Teresa received us into the first formation period called aspirancy and gave us our shoulder crosses and Rosaries. We were a group of nine girls and we became the first African Missionaries of Charity.

What do the Missionaries of Charity do?

The sisters’ apostolates are different in different countries. One of the first things Mother Teresa set up in India were houses where the abandoned people could come to die with dignity. In a number of countries, we have houses for abandoned children and we also offer medical care for the lonely from the womb to the tomb. We also deliver food to the poor from what Providence gives us. How we help depends on what the person is able to do for himself. Mother Teresa said that when a man is poor, he is not able to fish, but he has to been given fish. When a person is strengthened, it is enough to provide him with a fishing rod and it would be quite wrong to give him fish.

We get up in the mornings at 4:40. By five o’clock we come to the chapel, pray the Divine Office and keep an hour of meditation. Then we cook and do the houseworks. After breakfast, we go to Mass those mornings there is one in the parish, and upon returning from there we have half an hour of spiritual reading. Thursdays are days of more intense prayer and community life. On other days we go out visiting families, homes for the elderly, the lonely old people, or wherever we are needed. We almost always go two by two, and we pray the Rosary while walking. On Saturdays, we teach religion to a group of children at our house. In the evening we go to Mass if we have not been in the morning. The Holy Mass is the soul of our life; it is for us as necessary as the air we breathe. Every day we also have a one-hour Adoration; everybody is welcome to join on Mondays from 5:30 p.m. to 6:30 p.m.

We get our food as donations from nearby shops, so we do not have to worry about nutrition. In Finland, we always encourage people to think about others, to go out and to e.g. make blankets so they would not sit by themselves thinking about themselves and becoming depressed. We also visit groups of people crotcheting blankets for us in different parts of Finland far away. I came to Finland in 2011, so I am also still studying Finnish although it is very difficult.

What is the impact of Mother Teresa’s spirituality in your life?

I live my whole life with by the rule established by Mother Teresa, so the effect of her spirituality in my life is strong, of course. I would say, however, that life is always a challenge, whether you are married, alone or in a convent. Jesus often requires me to do things I might not actually want to do. However, I have freely chosen this way of life and I want to be faithful to the choice I made. When I am here, it is because God wants me to be here and to become a saint in this very place.

In our spirituality, it is important to remember that we live in God’s providence. We have received everything for free, and God will continue to give us everything we need. We do not need to take care of our needs, because God takes care of them. We get to be careless and happy. It is also important that we are called to take every person as a child of God and in very concrete terms treat them according to their dignity. Listening to the present Holy Father, Pope Francis, I often notice that his thought is very practical, just as if he were the disciple of Mother Teresa’s.

What kind of tasks and experiences have you had in the past?

First, I lived for one year with the sisters in Tanzania to get to know the prayer life and apostolate of our Congregation. Then we were divided into two groups, one of which went to India and I went to novitiate to Rome for two and a half years. Immediately after the novitiate I was sent to a mission house in Ethiopia where I spent 15 years with just a few small breaks. At the time, Ethiopia was at war with Somalia and there was a great famine. Material needs were great out there; people did not have food and practically no health care. That was the first time I saw large numbers of dying people. People from far-off villages could come to queue for food and die in the queue of hunger and exhaustion after a great effort. During the years in this demanding environment, I also had a year of preparation for the perpetual vows; first, I went to visit my home for two weeks and then I spent a year in Kolkata, India.

After my sixteen-year mission in Ethiopia was over, I returned to Rome for a year of spiritual renewal. Then I was sent to Nairobi, Kenya, where my job was to form the new sisters. I did it for almost ten years. The next destination was the famine-ridden southern Sudan, an area where I worked among the Dinka people. I got sick there and had to return to Kenya to recover. My next mission was three years in my country, Tanzania, but I did not enjoy that. Then I went back to Kenya for another two years, and there we had a home for abandoned children. Once a woman came to the gate with a child in her basket, left the child and disappeared. We never got to know who the mother of the child was. The child grew and developed, and went to adoption abroad.

After Kenya, I needed more prayer and I was able to come back to Rome for a year and a half. From Rome, I was sent to quite another type of conditions to Novosibirsk, Russia. I was there for three years, helping families, delivering food and taking care of alcoholics. It was shocking to see how alcohol made ​​people to pass out in the frost, and how their limbs often had to be amputated as a result. After Russia, I came to Helsinki in 2011.

What is best in your life?

The best thing in my life is Jesus, He alone is enough and I could not have anything more than him. I encounter him every moment of my life: now when I speak with you, when I wash dishes, anywhere. I get to do everything for Jesus, because of him and in him. I believe that when we stay true to Jesus, we are truly, deeply happy.

What would you like to say to young women who are looking for the way in life?

Young people’s life is often very difficult. I urge all young people to pray, confess and go to Mass regularly, so they can find the path of life willed by God. We sisters often pray together with the young people who come to us. Mother Teresa calls us to bring all the sufferings of Jesus’ feet. It helps.

If there is a girl who is thinking of joining the Missionaries of Charity, the first thing is to pray about it for two years. If the call is from God it will last and become stronger.